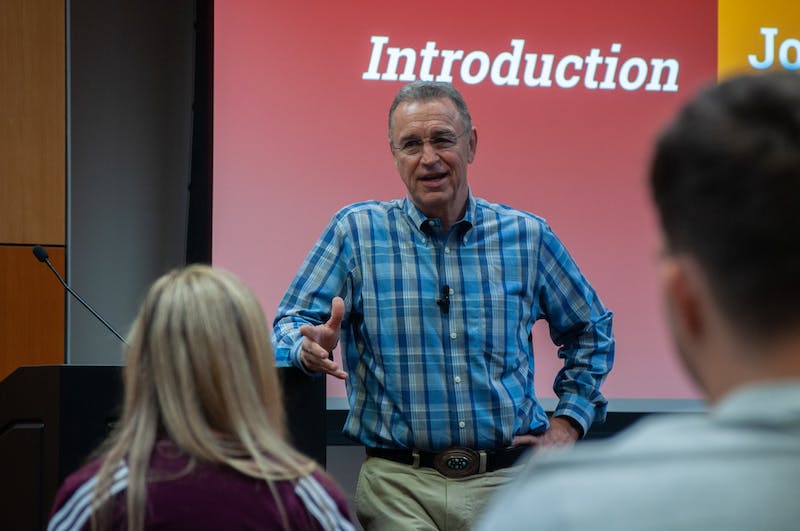 Salmon, former vice president of government affairs at ASU, spoke to the club about his gubernatorial candidacy and his positions on issues such as the economy and immigration

Former US Representative Matt Salmon, former ASU Vice President of Government Affairs, spoke about his positions on economic policy, immigration and federalism at the first event in a series of candidate visits hosted by ASU College Republicans On Monday.

At ASU, he oversaw the school’s cultural relations with the U.S. and Mexican governments, but resigned earlier this year to launch his second campaign for governor of Arizona after an unsuccessful attempt in 2002.

Discussing his platform, Salmon said he would like to reduce Arizona state income tax to attract more businesses and jobs to the state and ban critical theory of the race as a compulsory course or training because it is a “policy that only divides people.”

Critical Race Theory refers to historical analysis examining both past and modern structural racism. It is a form of scholarship aimed at examining the intersections between race and the law to achieve fairness.

KNEW College of Liberal Arts and Sciences offers critical courses in racial theory, and some universities require students to take at least three credits of an ethnic studies course to graduate.

College Republicans President Joe Pitts, a junior studying civic and economic management and thinking and leadership, said the club will welcome other gubernatorial candidates throughout the semester, including Karrin Taylor Robson, Kari Lake and Kimberly Yee.

Meeting all these energetic students who believe in small government and individual freedom gives me so much hope. The future of our country is in good hands.

Thank you for inviting me to the meeting tonight, @ASUCollegeGOP! pic.twitter.com/Gh4kEGckpL

Pitts, who moderated Monday’s event, said he believes in primaries the voices of older voters are heard more often than the voices of students.

“We think something like this, where it’s a forum for students to express themselves and ask questions of future governors about how they’re going to lead, is vital for democracy,” Pitts said.

Salmon condemned a US Department of Justice investigation to the Phoenix Police Department, which will review its practices to determine if there is evidence of discrimination against racial minorities, people with disabilities and others.

Salmon also referred to the 2020 Black Lives Matter protests and condemned the move to fund police.

“I want Arizona to be recognized as a state that absolutely represents blue,” Salmon said, referring to the police.

Salmon promised to adopt an anti-abortion policy if elected. Salmon said he supported a recently passed Texas law that bans abortions after six weeks and allows private citizens to sue abortion clinics and anyone who helps with the procedure.

“I love it,” said Salmon. “If we don’t stand up for life, we’re not standing up for anything.”

Salmon also called for Republican unity, saying the best thing Republicans can do is elect other Republicans, even if they disagree on some issues. Salmon said those who refuse to work with other Republicans because of minor disagreements are hampering the party’s platform.

“We have to be bigger than that,” said Salmon. “I believe in a big tent.”

Isaac Humrich, a first-year political science student, said he was “impressed with (Salmon’s) responses, especially the responses regarding the Republican Party’s big tent.”

Although Salmon has been criticized for his political career, he said his tenure in public service shows he can get things done.

“My feeling is that the experience is a good thing,” said Salmon.

Continue to support student journalism and donate to the state press today.

What do you want to be when…? | Bridgeport WV News