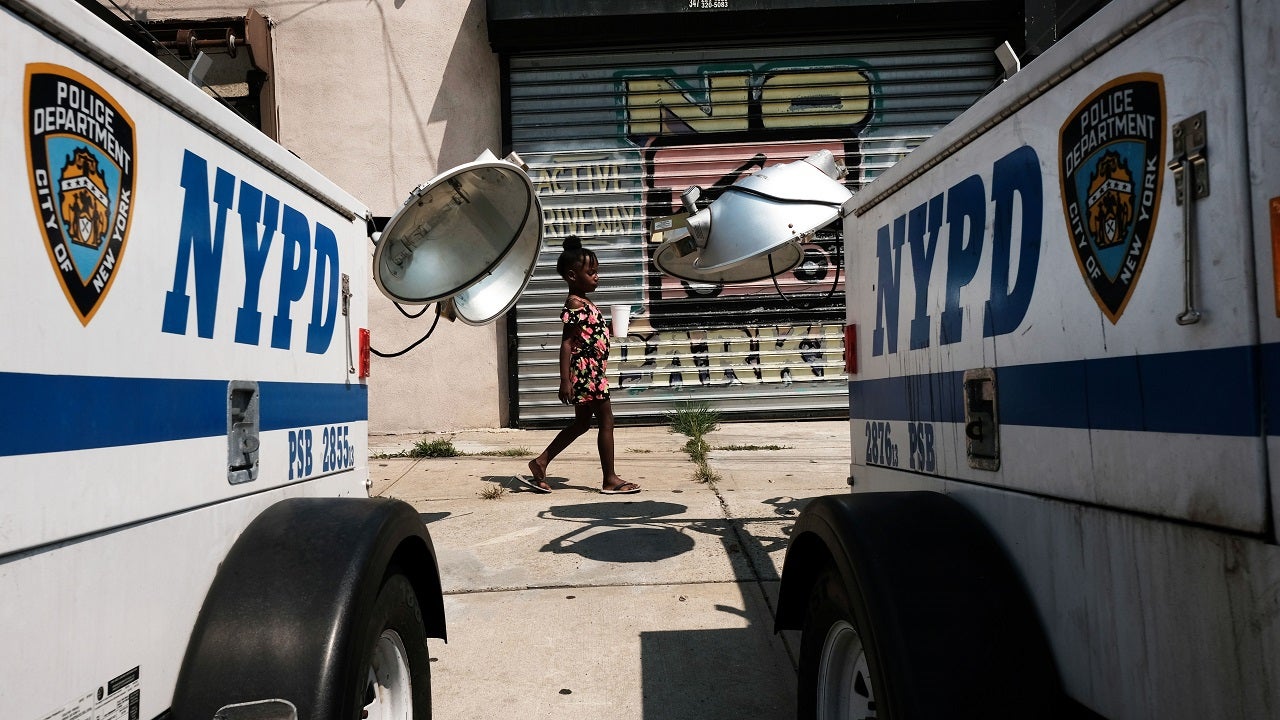 New York City has seen a string of random or unprovoked attacks on children, including in some of the Big Apple’s wealthiest neighborhoods as police and parents prepare to send children back to school early next month.

Children suffered such attacks on the streets of New York just last week, when three unsuspecting pre-teens were punched and shoved while in celebrity-frequented Greenwich Village, according to multiple reports local.

A girl walks a block past police lights in the Brownsville neighborhood of Brooklyn in the area where one person was shot and killed and 11 others were injured after gunmen opened fire during a huge block party on July 29, 2019 in New York.
(Spencer Platt/Getty Images)

And the number of victims under the age of 18 has increased by 34% since the start of the year compared to 2021, according to statistics. According to data provided by the New York Police Department (NYPD), 117 victims under the age of 18 have been shot as of August 14 this year, compared to 87 children and teenagers shot during the same period in 2021.

But experts have warned against the notion of any pattern of child molestation. Citywide murders and shootings involving victims of all ages are down year-to-date to Aug. 14, while felony assaults are up 19%.

As New York parents prepare their children for the start of school in early September, an NYPD spokesperson said the department “regularly evaluates the safety measures deployed in New York schools and, based on these evaluations , we are making the necessary adjustments”.

“Additional NYPD deployments are determined based on intelligence gathered, schools that have experienced challenges, and schools that need a heightened presence. Safe corridors are deployed between select schools and the nearest transit center provides a safe path to and from school upon arrival and departure,” the spokesperson wrote in an emailed statement. “Corridor locations change regularly based on an analysis of crime data and incident trends.”

A 12-year-old girl was in the Washington and West 11th Street neighborhood shortly after 5 p.m. on August 9 when Rodney Perry, 34, randomly punched her in the face, local FOX affiliate 5 New reported. York. She reportedly suffered a minor injury, but otherwise she was fine.

Perry then allegedly carried out two more unprovoked attacks pushing nearby 11- and 12-year-old girls, police told the station. None of the victims were injured.

Perry was charged with assault, though it was unclear at the time whether he had been released under the state’s bail reform laws, FOX 5 reported.

A 6-year-old girl was riding her Razor scooter in Brooklyn’s expensive Williamsburg neighborhood, an area home to homes with a median value of $1.4 million, according to realtor.com estimates. According to authorities, a trio of violent thieves targeted the girl on the evening of July 28. One of the three suspects allegedly punched him in the chest while the others stole the scooter.

The male suspects then fled. The victim received medical treatment at the scene. Police later released surveillance footage of the suspects, believed to be between 14 and 16 years old.

PERFORATED STEPS FROM THE PLAZA

Meanwhile, a 9-year-old girl who traveled from Miami in March was randomly punched as she strolled near Central Park and the Plaza, Manhattan’s historic hotel, according to multiple reports and a good Samaritan.

Raheem Ramsarran, 27, was reportedly seen ‘screaming’ at people before carrying out his unprovoked attack on the girl, said doorman Neil Johnson, who stepped in to help.

Ramsarran would have hit the girl in the head near the intersection of Central Park South and Grand Army Plaza just before 11:30 a.m. on March 21, when Johnson, who worked at the Plaza, intervened.

“I heard a guy screaming…then I heard a woman screaming, so I ran towards Central Park South. There was a man walking very fast towards a woman with a pram and a little girl. The little girl was crying, and the woman was screaming,” he told Fox News shortly after the attack.

“When you hear a woman screaming, and when you see the visual of a woman with a pram and a little girl running away screaming at a guy, you have to help her.”

The young victim was treated at the scene and did not require further medical attention, FOX 5 New York reported. Ramsarran was arrested just minutes after the alleged attack.

In February, Babacar Mbaye, 34, was arrested for randomly attacking a 4-year-old boy – and punching the unsuspecting child in the head – in bustling Times Square, according to multiple reports.

Mbaye has been charged with assault, endangering the welfare of a child and resisting arrest for the alleged February 17 attack. According to the New York Post, he admitted to prosecutors that he drank a bottle of disinfectant before the assault.

His defense attorney argued in court shortly after his arrest that Mbaye was “under the influence of an intoxicated and debilitating psychiatric episode”, Newsweek reported.

The boy was not seriously injured.

“People who do this stuff – mentally ill or not – are always looking for the most vulnerable. And it’s usually the very young and the very old,” said Joseph Giacalone, who now works as an adjunct professor at Johns University. from New York. Jay College of Criminal Justice.

He noted that the issue of children as victims was “difficult to define” and varied depending on the circumstances of each case.

“Each case must be handled differently and the reasoning behind it,” Giacalone added. “You’re dealing with mentally ill people attacking children on the streets of Manhattan. And then you look at the outer boroughs, or even in the neighborhoods of Harlem, Bronx, and Brooklyn. We’ve seen these drive-by shootings…Two different We can’t confuse the two, but they’re all very serious.

Anemone, who has been hailed as the mastermind behind the NYPD’s CrimeStat program, said reports of such child abuse would likely encourage more police presence in the area, especially if it’s a high traffic area.

“If it’s usually public places, commercial areas, transportation areas, you want to see the cops there,” Anemone said by phone. “We can’t cover every street in the city, but we can certainly cover the busiest ones.”

Speaking about trends and crimes involving children coming and going from school, Anemone said he’s learned in his 35 years with the NYPD that people have to ask “the tough questions.”

“How did this kid get punched? Where did it happen? What time of day? Where did he come from and where was he going? And the culprit? … What’s behind all this?” Anemone added. “I hope they ask those questions.”

Stephanie Pagones is a digital reporter for FOX Business and Fox News. Story tips can be sent to stephanie.pagones@fox.com and on Twitter: @steph_pagones.