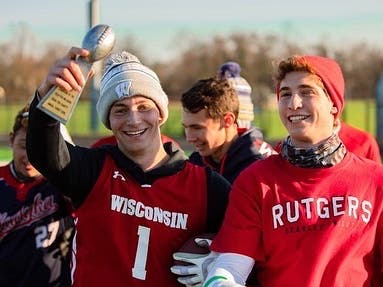 MILLBURN, NJ — Last year, Zach Maitlin, then a student at Millburn High School, had an idea. He planned a flag football tournament on Thanksgiving to raise money for hunger relief.

“We had eight teams competing,” Zach recalled this week. “It was an amazing turnout and I learned a lot as an event planner. I absolutely loved seeing how much everyone got into it.”

He created a website and planned future sporting events to raise funds.

He and his friend Baruch Akwaboah hosted a soccer tournament in June, donating all proceeds to Soccer for Dreamers, the Akwaboah family’s charity.

And this year, Maitlin’s group held another Turkey Bowl for charity.

“I sent my website out all over the school and had 12 teams participate,” he said. “I decided to combine the tournament with Missy’s Miracle, a charity that donates to organ donors and provides scholarship money.”

Missy’s Miracle, based in Short Hills, was founded to celebrate the 30th birthday of Missy Rodriguez who received a liver donation as a teenager. Teenagers who have been impacted by organ donation can apply for a scholarship until February 2023.

“We raised over $1,000 for the NJ Community Food Bank and for Missy’s Miracle and collected non-perishable food and canned food from the midfield,” Mailtlin said this week. “I’m extremely proud of how the tournament went and look forward to continuing to plan my college career.”